Home : Blog : A Better Way to Dig Under a House
Request a quoteRFQ

A Better Way to Dig Under a House 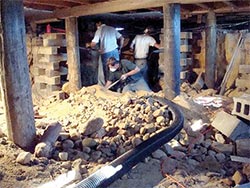 Like many Vineyarders, Michael Jampel owns an old house built over a crawl space. Crawl spaces under old houses, especially old summer houses, are nasty places. They often have only a few inches of clearance (low clearance crawl space) between the floor joists and raw earth. Over the years they collect spiders, skunks, mice, and other critters (and their droppings). Crawling under the house to repair wiring or pipes is dirty, uncomfortable, and dangerous.

Mr. Jampel, a building contractor, and developer owns a home on the west shore of Lake Tashmoo in Vineyard Haven. Parts of the home are typically moved to the site around 1900, and a newer part was constructed in the 1970s. Rotting wooden pilings have thrown the older sections out of level and plumb. He wants to replace the failing supports under the older parts of the house and deepen the crawl space from just a few inches to about five feet.

On the Vineyard, the conventional way to replace a crawl space is to jack up the house, excavate a new crawl space (or a full cellar), build a new foundation, and lower the house on it. The excavation used is done with shovels and wheelbarrows, but today contractors more commonly use a small diesel tractor such as a Bobcat. Either way, it is dangerous work.

Mr. Jampel thinks he has found a better way. He has leased a machine called a vacuum excavator from a company in Wisconsin. The Hurricane 500E looks like a 20-foot-tall funnel-cake machine poised over the dump truck which will haul away the material sucked from under the house. A 170-horsepower motor pumps sand and dirt and air at 500 cubic feet per minute through a flexible four-inch hose into a six-foot tank that whirls and screens the spoil, much like a bagless (cyclonic) home vacuum cleaner. Every five minutes, the Hurricane stops and drops the contents of the tank into the waiting truck.

The vacuum hose will dig all by itself, Mr. Jampel says. When used that way, he laughs, the hose looks like a big black snake crawling to its hole. But after a week or so of experimenting, Mr. Jampel and his foreman, Farley Pedler, have discovered that the most efficient method is for workmen to shovel the sand on a screen and let the hose carry it away. The vacuum hose digging under your house has replaced the wheelbarrow. Screening allows the workers to easily remove rocks or other debris that would clog the vacuum. After the earth gets removed, workers install new wooden pilings every few feet, and the low workspace under Mr. Jampel's house looks like a primitive gold mining operation. The sand rushing through the pipe sounds like a child's marble game.

Mr. Jampel says that the vacuum excavator has several advantages over a Bobcat. For one, the soil gets disturbed only under the house, and the dump truck Is as far as 800 feet from the job site, sparing lawns and landscaping. The Tisbury conservation commission, Mr. Jampel reports, ruled that his Tashmoo excavation will have no environmental impact at all, and did not need any hay bales or other devices to protect the lake, which is only about 50 feet from the house.

Another advantage is that the digging under your house job site is almost dust-free. Especially at the top of the excavation, where years of dust and animal feces have accumulated, it is a big advantage to have the vacuum pull the material away from the workmen and send it through the machine's HEPA (high-efficiency particulate air) filter. Also, there is no diesel exhaust, as from a Bobcat or other excavator.

Mr. Jampel says the most important advantage is that the vacuum excavation system is easier and safer than jacking up the house and/or digging under the house with a Bobcat. The work proceeds carefully, and new support posts are placed close together as the excavation moves under the building.

If you're interested in this method and would like more information, please contact us. We make it easy to purchase or rent an industrial vacuum- Request a quote or request a rental today.